This beautiful Kalamazoo archtop was built in 1939 by Gibson in Kalamazoo, Michigan. It came to me in rather poor condition: The frets were corroded, worn down and loose, the neck had developed a back-bow, the body had a large amount of cracks and the fretboard was coming loose over the entire right side (aside from some smaller issues).  In its current condition is was unplayable. 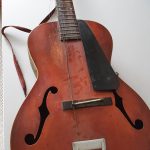 How the guitar arrived 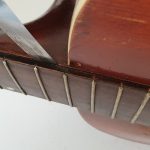 The fingerboard was coming loose 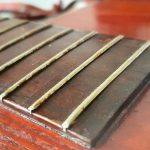 The condition of the frets 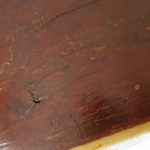 One of the many cracks and holes

I started by removing all the hardware and giving it a general cleanup. At this stage I also noticed that the bridge and tuners had been painted with gold and silver paint at some point. This paint had to be removed as well.

The next thing I did was remove the old frets. These came out very easily (some could actually be pulled out by hand). This allowed for a very clean de-fretting job. I then focused on the loose fretboard. It looks like this was the result of a poor glue job in the past. Luckily, the fretboard could be glued back without any issues (as there was no damage and both the neck and fretboard surfaces were flat and clean). I reglued the fretboard using hide glue. 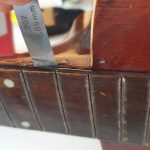 In the process of regluing 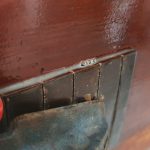 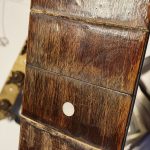 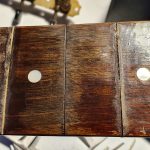 Next, I addressed the cracks in the body. There were a lot of them (at least 10, but I lost count at some point). I managed to stabilize them and I also filled up some small holes. Some large cracks had been fixed in the past by someone else (rather crudely) but since they were stable I decided to not open them back up. 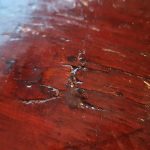 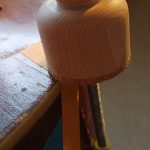 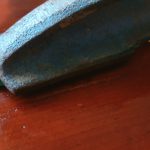 A small crack in the top

When the body was completely stable again I focused on the neck and fretboard. One of the pearl markers was missing so I drilled out the hole and replaced it with a very good replica. I then flattened and re-radiussed the fingerboard to a 12″ radius (I removed the back-bow by flattening out the fingerboard). There were some deeper grooves in the fingerboard wich I did not sand out since the fingerboard was already very thin to begin with. I could have filled them up, but since they are a part of the history of the guitar I decided to leave them. 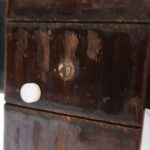 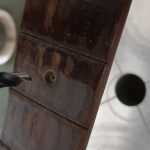 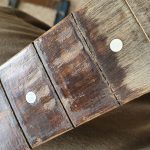 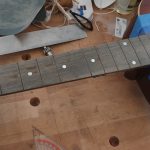 After sanding the fingerboard I noticed that it was not rosewood (which I had expected). I’m not sure what wood species it is, but it didn’t look very good on the guitar (which is probably why it was stained in the first place). So I stained and oiled the fingerboard to return it to its original colour. 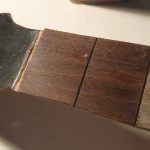 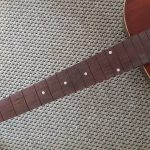 Looking better, but not quite good enough 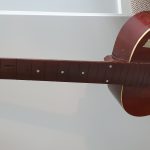 Before starting the refret job I had to deepen the fret slots which I did with my Japanese fret saw. I then started the refret. I used vintage style fretwire for this job. The refret actually went very well, even though the fingerboard wood was quite soft. I then continued by levelling, crowning and polishing the frets. 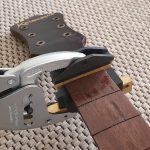 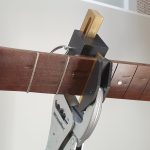 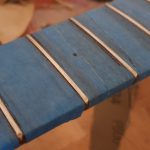 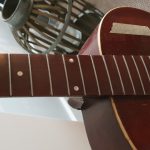 In the mean time I also removed the paint on the hardware. Now you can actually see the Kluson stamps on the original tuners again!

Last but not least, I assembled everything and gave the guitar a light cleaning and polishing. I then started on the setup. The action was somewhat acceptable when I started out, but it was still quite hard to play. Of course since I did the refret myself, I had complete control over the geometry of the fingerboard and frets. Hence, I was able to accomplish a very good setup on this guitar. The action is quite incredible at 3.5/64″ on the low E and 3/64″ on the high E with no fret buzz whatsoever (I reckon I could even have gone slightly lower but it plays very well now). The intonation is also spot-on, so I couldn’t be happier with this one. I fitted it with my favorite 80/20 Bronze strings (custom light gauge) and it sounds great. Lots of volume and surprisingly ‘modern’ for a guitar of this age (I expected a more dry, boxy sound). 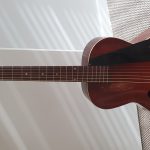 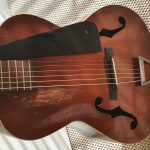 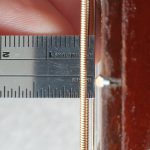 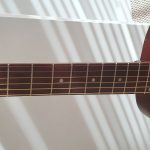 Overall a great restoration project on a great instrument!

How to find us 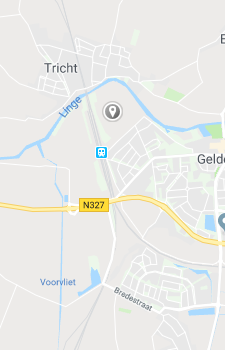